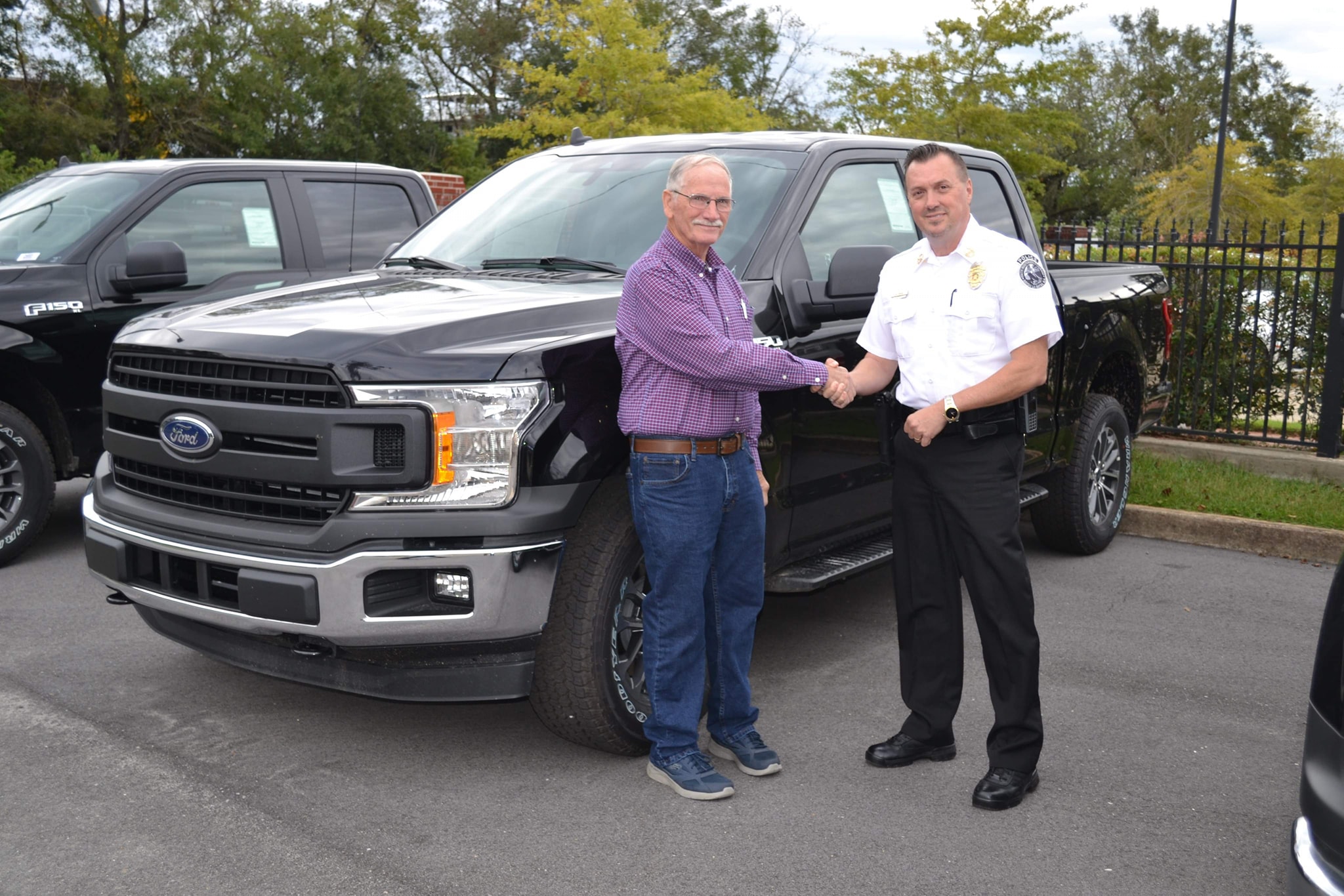 “When devout Christian people are praying for you, you can walk through the fire,” Downey stated. When Mayor Downey first came into office, I met with him and spent some time getting to know him a little more and pray for him in his office as he started his service to the city of Bayou la Batre. Downey shared many accomplishments and hurdles of his past four years as Mayor first wanted to thank the Lord for guiding him and blessing him and second all those praying for him. Downey joked, saying, “I have enough mess-ups throughout my life to fill up this room, but I want to always be quick to give the Lord credit for what He has done.”

Just recently, the Bayou la Batre Facebook page shared a picture of Police Chief of Bayou la Batre Scott Dagg and Mayor Downey of delivery of five new Ford F-150 4×4 trucks for service. “These are brand new trucks and were able to be leased for $3000/year. At the end of 6 years, we can buy them for $1. The one I drove here only had 3000 miles on it,” Downey shared. Coming into the position, the city was strapped for cash with a huge debt owed to the bank, but currently, the city is sitting in a very nice position financially. Not only that, but with the help of grant writers and close relationships with people like Jerry Carl, Bayou la Batre will see upwards of 55 million dollars with the dock project, utility lines, water treatment plant, and other things that have been done and will be done.

The next administration will have some overhang from the previous on the matter of Safe Harbor Housing. When asking about the issues looming there, Downey made sure to share that the people living there are safe. “Safe Harbor is not for sale. The board is currently getting its feet on the ground. They have hired a part-time person that will manage the properties, and we have a good board.” The board is now comprised of Paul Burch, Mike Burdine, Johnny Hatcher, Stephanie Godsey, and Debbie Jones. Downey shared that they recently had a really good meeting about the Safe Harbor property outlook and are ready to get to work.

Lastly, Downey shared an uncompleted list of numerous projects that maybe the city residents didn’t know about that the city was able to do in the past four years. He had hoped to finish it but did not get it to finish before our meeting. Some include, but are not limited to: New roof for city hall ($37,000), new fire station roof ($31,000, $16,000 coming from Fema), New roof on drive-thru at the community center ($46,000), the new pier at Rolston Park ($60,000), nine Crownvics from county donated, new ice machine at the ballpark, new sprinklers for the field, and the list goes on and on. One of the last upgrades to the city is going to be a bricked bathroom at Rolston Park that is to be put in very soon.

“The job is tough,” Downey shared but mentioned about the many blessings God has poured out over the years that he has been Mayor. Every mayor has a legacy, a certain personality about them, and something that is dear to their hearts. Downey shared that his faith is what guided him and hopes that will be what he will be remembered for. He never aspired to be the Mayor of Bayou la Batre, but God opened the door, and he walked through it, and from the looks of things, we are headed in the right direction.