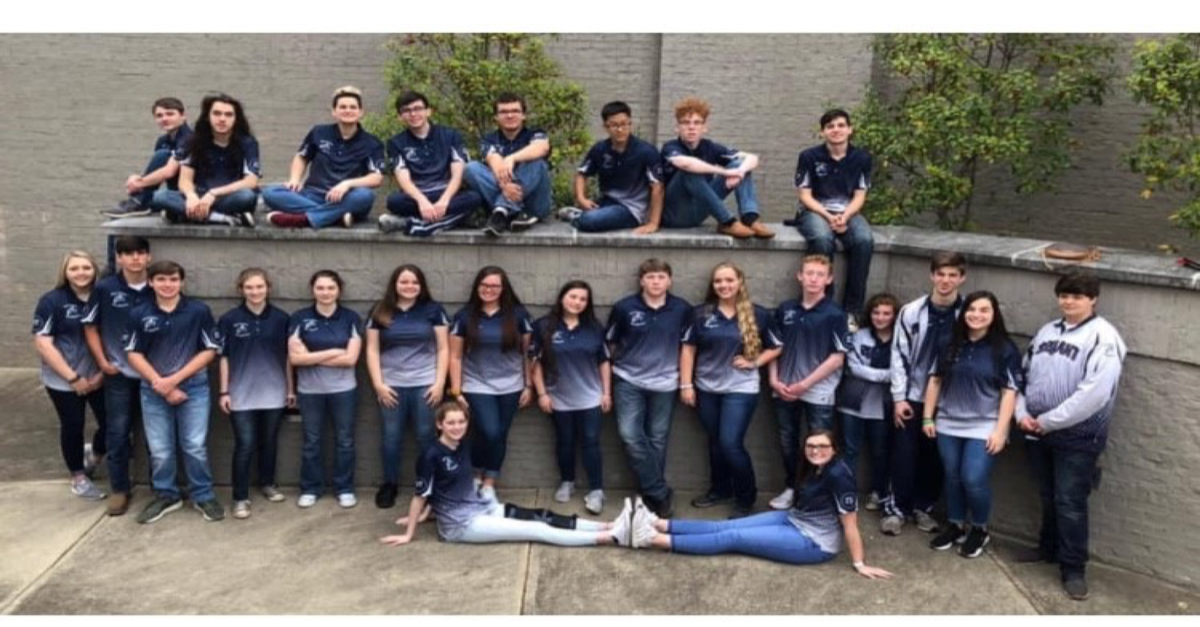 Congratulations to the Alma Bryant Hi Q team! They recently won the 2019 Hi-Q Area Championship in a tight match with Baker and McGill-Toolen and the team followed up later in the month as the Alabama State Winner and the National Runner-Up winner of Hi-Q! What an awesome finish to a fantastic season for the ABHS Hi-Q Team and their sponsors, Kent Patrick, and James Kimbrough.  Bryant’s team this year consisted of five seniors and two underclassmen. The seniors are Victoria Serra, Skye Sutton, Jonathan Belle Isle, Michael Crawford, and Larry Harbison. Suttree de Lorge is a junior and Braden Vick is a freshman. Daniel Bell Isle and Ethan Humphrey are also members of the Hi Q Team at Alma Bryant High School.

Congratulations to Jailyn Swink for winning 2nd place at the University of South Alabama high school speech contest. Jailyn is a freshmen student in the Alma Bryant High School Cambridge program. She competed against approximately 20 students from all over Mobile County.

The students in the Alma Bryant welding program have been busy designing a new sign for the Oddfellows Cemetery located on the corner of Hwy 188 and Irvington-Bayou La Batre Hwy.  Under the leadership of instructor, Kenn Crenshaw, students utilized equipment provided by Ingalls Shipbuilding to complete the project.

JROTC cadets from each of our high schools were recently recognized during the Mobile Area Chamber of Commerce’s Military Appreciation Luncheon. Army JROTC Cadet COL Charles Cartee, of Alma Bryant High School, was one of the honorees. Congratulations Cadet COL Cartee! Chief Adam Bryant and Col. Stephen Legg serve as instructors in the program at ABHS.

On April 8, 2019, the Bayou La Batre Planning Board reviewed several important requests for zoning changes and subdivision approvals.  A property owner in the Meadowlark Run Subdivision received approval for subdividing a parcel of land, however, the subdivision approval request for the Duck Hill Property off Henry Johnson Rd. and Shell Belt Road in Coden, Alabama did not receive the same news from the board.  Local historian, Roger Milne, spoke on behalf of the Bayou La Batre-Coden Historical Society.  He noted that the property in question had extensive historical significance and was known by locals to be an important burial ground.

Board member, Stephanie Godsey, also spoke on the significant information she had obtained through discussions with archeologists from the University of South Alabama and other entities. Planning Board President, Debra Jones, also noted substantial concerns on the plans to locate housing units on the property without further archeological studies. Planning Board members also voted to establish the Safe Harbor Subdivision area as an R4 zoning district, which would allow the Bayou La Batre Housing Authority to develop the properties in the area more extensively.

Students entering Alma Bryant High School as 9th graders for the 2019-2020 term and students in current grades 9-11 can now apply to attend the 21st Century Community Learning Center Summer Enrichment program at ABHS.  The program will operate Monday through Thursday from 8:00 am to 12:00 pm during June.  Several field trips throughout the State of Alabama, Florida, and Mississippi are in plan along with other enrichment activities.  Parents and caregivers may contact program director, Annette E. Johnson at ajohnson2@mcpss.com or by calling 251-454-4417 for more information.  There is no charge for the sixteen days of activities planned for the students.