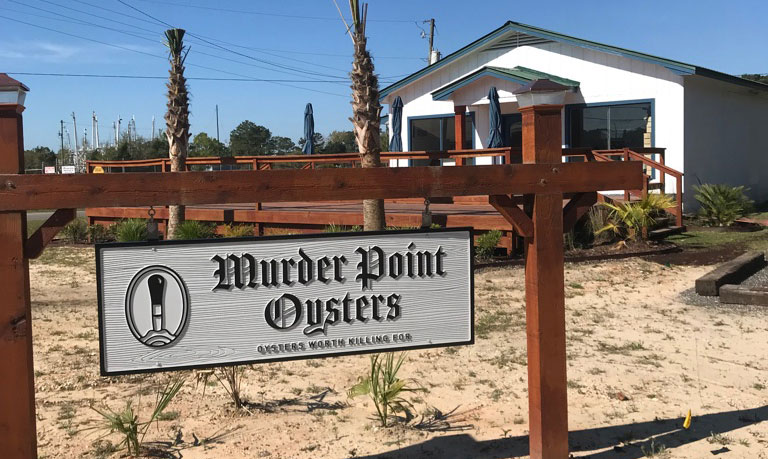 Oysters Worth Killing For

The commodity of a real Alabama oyster with a buttery taste and a perfect texture available for all in Bayou la Batre, AL.

Before the initial opening of the first Murder Point Oyster retail store location, I had the chance to sit down with Lane and Jordan Zirlott to chat about the history and process of making an oyster worth killing for. Just for the record, Lane wanted to make sure that I knew he was still a shrimper and will always be a shrimper. The Zirlott’s were always known for bringing in quality shrimp and that lifestyle of work being who they identified as. Both Lane and Jordan worked on shrimp boats growing up and as both would become adults Lane would find himself running and managing as Jordan would go into the medical field. A day in 2013 would change things in ways they would have never guessed.

A program offered by Auburn University sought out commercial fisherman and others to be a part of Oyster farming, Brent and Lane thought that it would be interesting to check that out and the rest is history. Six years later, down University Road in Bayou la Batre, AL, Sandy Bay Oyster Company with their Murder Point Oysters have stretches of baskets filled with thousands of oysters as well as a hatchery that serves multiple other farms on the coast. The mindset was simple when starting the company. There was no mindset. There were no preconceived notions on how Oyster farming was supposed to go, not even the idea of how an Oysterman was supposed to be because none of them had ever been an Oysterman. It was a totally new business and opportunity for the Zirlotts. One thing was for sure; they went at it full force.

Lane took me briefly from start to finish. Spawning in the hatchery is the first process, and then they are moved to a tank in which water continually flows through the oyster and they begin to grow. Once they develop a foot, they are ready to set. For a Murder Point Oyster, this is very specific in that the shell has to be as small as a grain of sand (200 microns or 0.00787 inch) which is just enough room for one oyster to set on. From there they will continue to grow until big enough to place into the baskets, and after about ten months they are ready to be served as a Murder Point Oyster.

There is a good story that is told still to this day at 167 Raw café in Charleston, South Carolina about what Lane would call Gorilla Marketing. In most restaurants, they would walk into the back and begin shucking oysters for the chef and allowing him to try it right on the spot. No pre-calls, no scheduled meetings, just in your face do you like it or do you not approach. There was no back door into 167 in Charleston, South Carolina so Jordan and Lane took to the front door where there was somewhat of a lunch crowd. They walked up to the bar with their oysters and asked for the chef and began to be blasted by the restaurant manager telling them how their approach was so unprofessional and such. Lane took it upon himself to slam the oysters on the bar and yell “Roll Tide” in the heated exchange, and Jordan took it upon himself to drop off a business card with the oysters. A man sitting on the edge of the counter that heard the conversation told the manager that he bets that is the best oyster he would ever eat. About 15 minutes later the chef would call Lane, and a new customer would be born. Again, Lane would preface that they didn’t know the right or wrong way to do things, so they did it the way they thought was most effective, and in this case, it was.

What the Zirlotts would come to find out in the six years of oyster farming was that all the shrimping had a purpose, from already having relationships with processors, to having coolers in place that would be needed. However, all of it has not come without any hurdles. Two years in a row they received seed late from Auburn and saw fit to build a hatchery to curtail that from happening again in the future. There was no five-year plan, just stepping through open doors when they were presented. Faith is a stronghold of their family and has played a large roll in decisions as well as an outlook on what the future holds. Whether it be the opportunity to share the Godly characteristics with, as Lane would say, “people we have no business being in a room with,” or the opportunity to potentially be a vehicle to help change a city for the better, they know this is what God wants them to do. Just last year they had just about a million oysters spawning in the water, and they are putting shell in places in the bay as well as building a reef. They are putting shell back that is non-existent right now. Once the misconceptions of things like picking oysters off the bottoms and putting them into baskets are out of the way, the hard work that is put into the farming is something that can be appreciated by all. Similar to when business was shrimping, Lane says, “this is what I do. We wake up, and we are Oyster farmers.”

Yet, it is not all about them. They have the heart to share with others, teach others, and give back what they have been graciously given.  Lane would say, “A rising tide floats all boats” meaning that as they do well in the business others will do well also. You can find other Alabama farm-raised oysters, and in that search, you will find a Murder Point. People have different tastes. Another Alabama farm raised oyster has a mint taste to it. Murder Points are marketed as “Butter Love” in that it has a buttery taste. Taking a drive through Bayou la Batre, you will find the new Murder Point Oyster retail store where you are now able to purchase them locally in singles and dozens. Apparel and such can be bought as well, and the staff gives free training on how to open oysters. Currently, their hours are Thursday and Friday 9:00 a.m. – 4:00 p.m. and Saturday 9:00 a.m. – 11:00 a.m. and on why they call them Murder Point Oysters, you’ll just have to go see them at 13640 N Wintzell Ave Bayou La Batre, AL 36509.