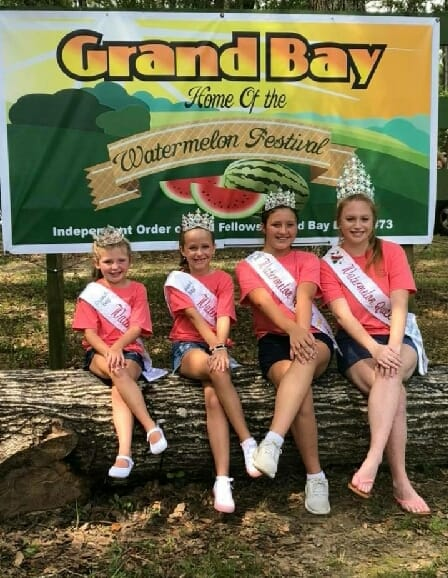 We thank God for another beautiful day to celebrate the 4th of July at the Grand Bay Watermelon Festival with lots of sliced ice cold watermelon from Sessions Farm to cool us off. Our beautiful Queens were there to meet and greet visitors, not only from Grand Bay, but from all over the U.S.A. We hope that those who visited with us had a great time, ate lots of ice cold watermelon, and plan to visit with us again next year.  Lots of pictures and videos are available on our Facebook page: Grand Bay Watermelon Festival.  We have a beautiful photo op site, designed by Kimon Brown, and also had a ‘Snap Chat’ filter for the Grand Bay Watermelon Festival:
Here are our Queens: 4-6 years – Carleigh Hatcher, 7-9 years – Lola Grace Fields, 10-12 years – Breanna Gale Houle, and our 17-18 year old group (and overall) Queen Sarah Jane Shearer.

Commissioner Jerry Carl has a lot of great plans to add to the Park which will be an asset to the citizens of Grand Bay. While the County will still lease the Ballpark to the Grand Bay-Union Athletic Association (GBUAA) the County will make many needed improvements to that part of the park. Commissioner Carl also envisions putting in a Splash pad, playground area, combination football and soccer field, upgrade parking, new lighting around the park, and that’s only the beginning, with a projected input of over 3 million dollars to bring our community a beautiful park. This won’t happen overnight but will happen a little at a time so please be patient. If you went to the Grand Bay Watermelon Festival you may have noticed the crushed asphalt on the road coming into the Park and the red dirt (that was intended to build up the low area) at the bottom of the hill. It will all take time and the Engineers are working on plans now for the much-needed upgrades and improvements. The Odd Fellows could never afford to do these needed upgrades and are very pleased that Commissioner Carl was able to accomplish this purchase so that this beautiful Park can be used by more members of our community and not just for the Grand Bay Watermelon Festival and the GBUAA Ballpark. Stay tuned and we’ll let you know when plans are moving forward.