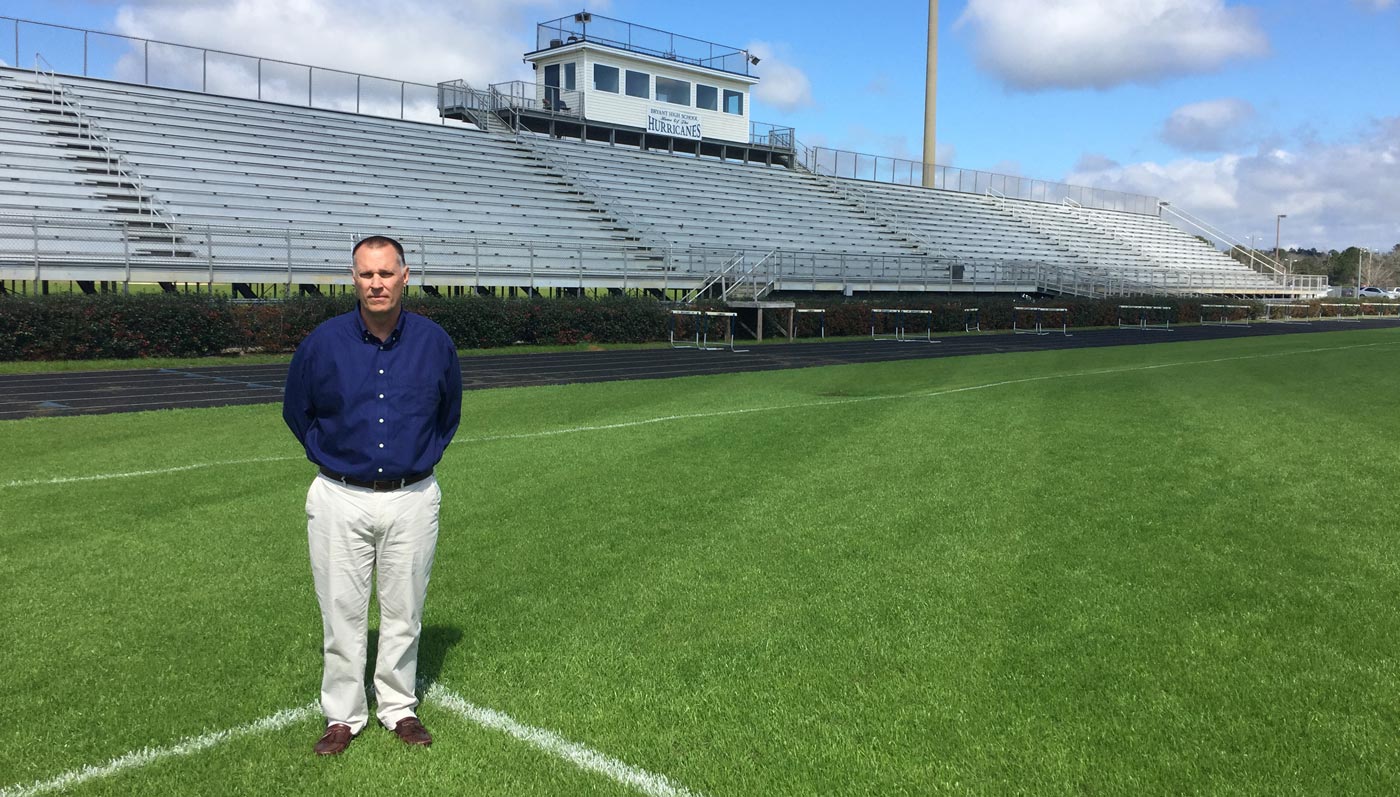 Into a blank office, with picture frames yet to be placed on the wall, a newly formatted computer that Zack Ward was setting up, and paperwork on the desk that had an address to a new home, Coach Doug Hoehn greeted with excitement and a smile to be able to meet another person from the community that cared about the program. Though new to the area, Alma Bryant High’s new Head of Football Operations Doug Hoehn (pronounced Hane), is not new to revitalizing football programs. Coach Hoehn comes from W.S. Neal in Brewton, Alabama where he served as Athletic Director and Head of Football Operations from 2011-2016. Previously he has had tenures at Hattiesburg High, Hillcrest Christian, and Potomac High in Virginia. Coach Hoehn comes to Alma Bryant as the Head of Football Operations but does not take the role of Athletic Director to his delight. This role was similar to the role he had in Hattiesburg and he mentions he likes it this way better to be able to focus more of his energies on football.

He and his wife Lisa, who works in the medical field, are in the process of moving into their home here. Coach Hoehn and Lisa do not have any biological children, but he does view the football players as his own. One of the main concerns that he shared was that of the culture these young men grow up in. We discussed about the problems of manhood and taking responsibility for actions as well as the statistics that plaque young men in our culture. On one end of the spectrum in Hattiesburg Hoehn dealt with the many problems inner city schools have with gangs, low socio-economic levels, and high statistics of minorities. On the other end of the spectrum in Virginia Hoehn dealt with median incomes in the three to four hundred thousands and many of his players getting scholarships to Ivy League schools. Speaking on this Hoehn has experience in various conditions that should be able to give him a good grasp on what is ahead at Alma Bryant.

On the facilities Hoehn spoke very well of what was in place, and mentioned that there would be some additions coming to the field house turf in the near future. Hoehn also spoke heavy of his past involvement in the Fellowship of Christian Athletes and his faith. One of the core beliefs of helping his players grow to be great men coincide with helping his players know of their potential in the Lord. Asking about past coaches and involvement of churches in the program Hoehn was very encouraged to know that the churches were involved in the program and planned to get them more involved with potentially doing breakfasts at the churches on game morning as well as having the churches provide meals for the players. Another addition that Hoehn would like to add for Christian leaders in the community to get involved is speaking to the team before the games. He mentioned that sometimes the players can get so familiar with what the coaches say on a daily basis that someone from the outside can come in and say inherently the same thing and bring light to the player’s eyes because they speak on it from a different position.

The Hurricanes’ previous head coach Bruce Breland tenure ended in November when he retired and moved back to Birmingham with wife Donna to focus on his treatments for cancer. Since then the previous year’s assistant and position coaches have been pushing forward with the weight lifting program and preparing the players for who would be named the new head coach.

With any new head coach there is hesitation from the community but also hope. Since the beginning of Alma Bryant many of the former players and parents look back to what many call the glory days in which big names like Brandon Johnson, Antwan Odom, and others played at The Eye of the storm in hope that those days will come again soon. Many also forget about the support from the community even before any touchdowns were made or games were won. That support is needed now more than ever as change has come. For any program to get to the top, not just in the win loss column, but in progressing the future of the players it takes not only a coach, but support from all. There are many of the current coaches that are staying on staff with Hoehn and continue to put vibrant effort into united all the players on the team as well as recruiting more. Hoehn even mentioned tapping into the soccer program to get kickers in different grades to progress them with the program. Officially Coach Hoehn started a couple weeks ago and still is in the process of moving into his home, getting to know the faculty and staff, and learning the different areas of South Mobile County. If you see him be a person of encouragement, and if you do not be a person of prayer for the season ahead and the players he has the opportunity of coaching. Go Canes!

If you would like to be a part of the program you can contact the high-school to find out when the next meeting will be with the Booster Club.