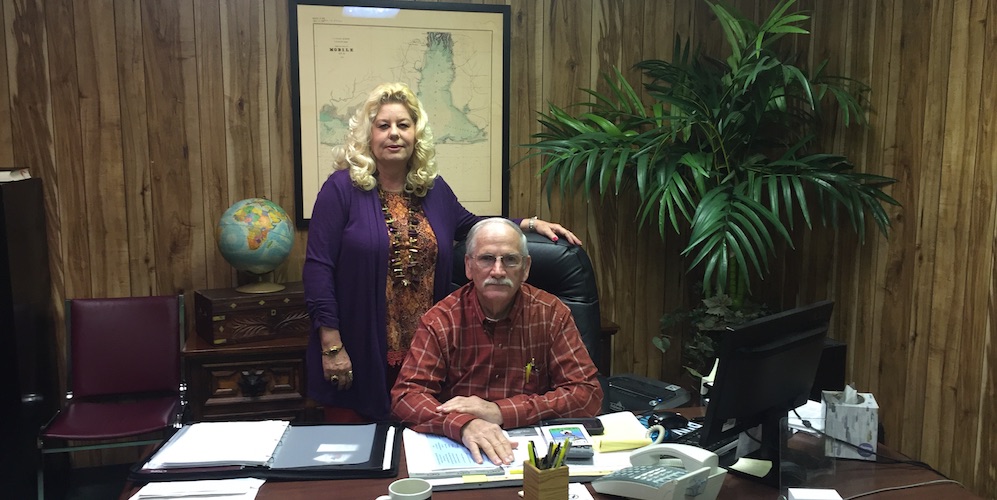 A Sit Down with Mayor Downey

This past November the City of Bayou la Batre swore in their new mayor Terry Downey. We got to learn a good bit of history about his profession, religious beliefs, and what he has planning for the city when we sat down with him this past month.

One of the first aspects that he was joyful in sharing was his faith in Jesus Christ. Mayor Downey became a born again Christian on May 14, 1979 after a friend and now local business owner, Chuck Weston, visited his house as shared with him. Mayor Downey’s wife Debbie was saved as a young girl during Vacation Bible School, but never followed in baptism so both had to opportunity to be baptized together at First Baptist Church in Bayou la Batre not long after.

By trade Mayor Downey was a pipe fitter and traveled all over the nation from paper mills to pharmaceutical plants doing that type of work. Though it kept him gone a good bit of time he still called Bayou la Batre home and in May of 2014 he officially retired. One of the passions that he shared was that of history. Most of the history that was shared was of biblical aspects, and because he found himself, at one time, in this proverbial boat he shared about the oldest trick in the book he believes Satan has over people, which is, if you can just be good enough that is enough.

We did finally get to talking about the Bayou and what brought him about running for mayor. Though many friends approached him about the opportunity simply put, it was because of his passion for this community. On speaking of his legacy Mayor Downey stated, “My legacy is going to be out there in Odd Fellows.  It’s about what is best for the Bayou. We want to be known as the friendly city.” Over and over he stated that he has no personal agenda and that he is solely looking out for the best interests of the citizens of Bayou la Batre.

There are some things that that happened and that are in the works now that he wanted to bring to attention. One was that he has a very important task at hand because 50 people make a living working for the City of Bayou la Batre from the fire and police force to those that work at city hall. When asked about the budget that has been the talk in recent history of the city he mentioned that is an aspect of his job that has been of great focus. In the spring he hopes to have a surplus auction that will include decommissioned police cars, equipment, and various other city owned items. This will allow potentially newer police cars to be purchased as well as help the current budget deficit. A common theme has been his staple to the department heads to not spend more than you take in. Along with working with the department heads to trim expenditures Mayor Downey shared that he is trying his best to be very transparent so that everyone is on the same page and everyone understands what is going on. One public current event that is coming up is on February 6th where the city will discuss to expand the planning jurisdiction from where it currently stands. Anyone is welcome to this meeting.

With a small community there are always rumors that float around the airwaves and I asked of one of them pertaining to Safe Harbor and the selling of those homes to current tenants. He assured me that those homes are not going to be sold and that the Safe Harbor community is one of the most unique community of homes as it is not being funded by the government but exists as a solitary housing authority giving affordable housing to people in South Mobile County.

So what is on the horizon for Bayou la Batre? A cleaner city for one. Taking the small steps to do so in taking an idea out of previous mayor Stanley Wright’s book and having trash picked up before the mowers cut the grass to cut down on confetti type trash. Other plans are to initiate a program to minimize the litter along the roads working alongside with the fast food restaurant in doing so. Painting work at the civic center and renovations to city hall through a grant that has already come in. Some was also spoken of having an RV park at Rolston Park, doing street fairs, and car shows as well as bringing more jobs and making Bayou la Batre even more desirable to call home. All in all there is a lot of enthusiasm for the city and for the citizens of the city to be proud of where they eat, live, and work. Though it is only been a couple months since stepping into the roll of Mayor, Terry Downey continues to pray every morning about the ways in which the Bayou can become even better.