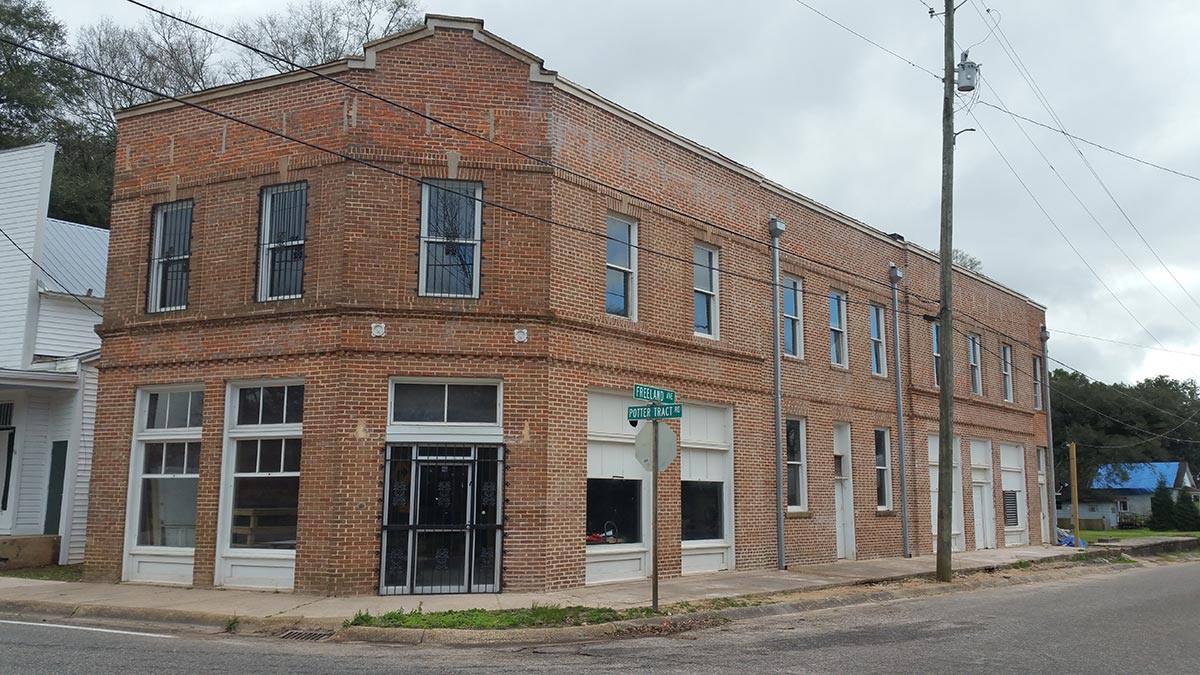 We are proud to announce that work on the exterior bricks on the Grand Bay Library is completed. The brickwork is being re-pointed, cleaned and sealed by Wayne Champagne of Champagne Masonry and his staff of masonry professionals who specialize in historical restoration of brickwork. This phase of \renovation is funded with the $50,000 matching grant from the Daniel Foundation of Alabama, and is under the direction of our Grand Bay Library friend, Lee McClinton. The next phase of work to the building will be the renovation of the exterior windows and doors. Many of the products used for the brickwork renovation were donated by local and regional businesses and corporations: Ready Mix USA, Birmingham; Boral Brick, Hattisburg; Acme Brick, Mobile; Hohmann and Barnard, Trussville; Riley Stuart Supply, Mobile; A&S, Inc, Irvington and Evonik (Degussa), Theodore.

Located on the corner of Freeland Ave and Pottertract Road, the Grand Bay Library was originally the Grand Bay State Bank building built in 1913.  At that time Grand Bay was a growing town, complete with a dentists, a doctor, a hotel, boarding houses and a packing plant for the abundant produce grown in the area. All commercial activity centered near the train station and the L&N railroad in the center of town, which is now the Grand Bay Historic District.

The Grand Bay State Bank and the Albert Freeland Store were two of the main buildings in the Historic District of Grand Bay. Now both buildings are the focal point of a renovation project sponsored by Citizens For A Better Grand Bay that will eventually include the Grand Bay Library and Museum, a gift shop and cultural center, and a town park.

From 1925 to 1975 the downstairs of the Grand Bay State Bank was used as the US Post Office and the second floor was used as the Masonic Hall. In the 1990s the building was occupied by the El Cazador Museum, housing Spanish Gold and salvaged artifacts from the treasure ship found in the Gulf Of Mexico.

The Grand Bay Library & Museum, in addition to being a public library and technology center, will highlight Grand Bay’s agricultural heritage with displays and historic artifacts both inside the building and on the surrounding grounds.

Friends of the Grand Bay Library will be meet in March to begin planning for the 2017 Library Gala to be held in May or June.  It will be a grand evening of entertainment, dining and dancing.  Call (251) 656-4576 for more info.

Funding renovations comes from Grants, Fund raisers and donations. Donations can be sent many ways:  Just Give https://npo.justgive.org/CBGB, Payal at citizens36541@gmail.com, or send a check to CBGBGrand Bay Library, P O Box 274, Grand Bay, AL 36541. Your donations are tax deductible.