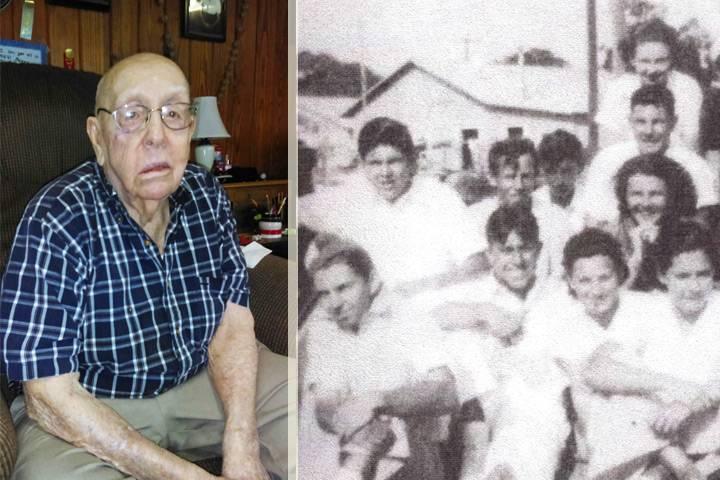 Clarence Thompson fondly remembers Airport Boulevard being a dirt road named Grand Street which gives you a quick sense of his history. Thompson is currently 95 and soon to be 96 years old on November 21st. He played quarterback on the first 6 man football team in the state of Alabama. Thompson approached the then Alba Football coach, Mr. Oliver Kuppersmith, during a Fall afternoon in 1936 and asked a simple question, “Can I play?”  Kuppersmith responded, “Go get a uniform!” Thompson played every sport Alba offered except basketball and was only 115 pounds when graduating high school. 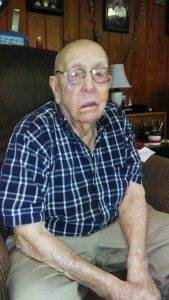 One of the most memorable moments was playing the homecoming game verses rival the rival Mobile County Tigers or better known as Grand Bay. They were accustomed to playing with 11 on the field but had to play with 6 against Alba. It was not until 1951 that Alba would play their first 11 man game. On that late November night Grand Bay chose to go for it on a 4th down play instead of punting and it was a quarterback sneak. Thompson, wearing a white sweatshirt, tan pants, and no helmet, went to make the tackle and was kicked above the right eye by his opponents “brogan,” which is an old slang word for the large shoes players wore.  After regaining consciousness all that was needed was a pat on the back from Coach Kuppersmith and back in to finish the game.  With the experience of playing with 6 players Alba was able to secure an easy victory over Grand Bay 65-0.  When asked how the team celebrated, Thompson discussed about the Great Depression and how, although winning is always exciting, there was not much to celebrate at the time.  Thompson was one of eighteen in his senior class under principal Mrs. Alma Bryant. 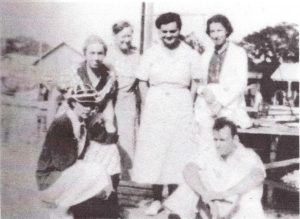 After graduating from Alba, Thompson enlisted in the Army and served all over the world receiving several medals for his service in his discharge.  After returning home he worked in the seafood industry and later retired from the Core of Engineers as their Chief of Computer Operations.  He now resides quietly at his home in Coden, AL with his family surrounding him. His advice to current Alba football players is to “Get out there and play the game.”